Probably won't be doing much over there, but I'm done here on LJ.  Same username at DW.

It appears Tia (whose name means Princess AND Goddess) would like to move in with us tomorrow.  We will endeavour to prove satisfactory.  She was previously living with her 3 grown up kittens, but the ape service was inadequate, especially in the grooming department.
If she likes it better here, she'll be staying.  If she disapproves of us and Leicester and Humbug fail to win her over, Blue Cross have said she can go back and try again.
We are all under the non-opposable thumb.
She is certainly very beautiful, even with the matted bits recently shaved off. 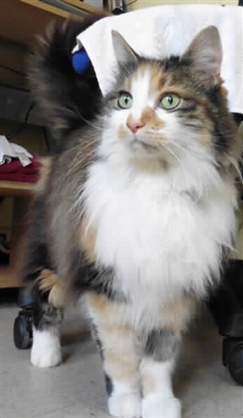 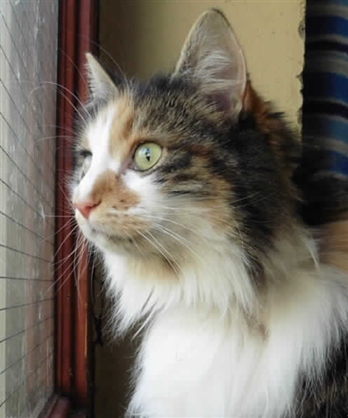 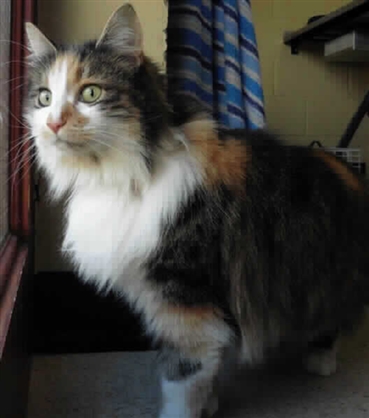 bugshaw.  The video is amazing.

Having a tooth out is not as bad as I imagined. Then again, I have a pretty nasty imagination. Also the anaesthetic has yet to wear off.

Text from Spidermonkey says he came off his bike in the wet and 'apparently has a fractured hip'.  I tried to ring back but he is in a lecture!  (He also said he is OK, just needed the painkillers he took to uni with him - basic paracetamol and ibuprofen.)  Am not sure what to make of this. I know he's tough, but broken hip fixed with paracetamol and back to lectures the same day?!?!?!?

(We were with him until 5.30 yesterday so we can rule out the possibility that he spent the weekend having emergency surgery and only told me about it today.)

Waiting for him to call me back....

Update
It's not broken.  Phew! Even a fracture in the sense of a crack or chip to the hip bone is very much a worst case scenario - with any luck he's just bruised and grazed.

It seems cycling in Cambridge doesn't prepare you for cycling around a very hilly campus in the wet.  He took a bend (slowly - thank heavens) and the bike tipped over.  Sensibly, he went straight to the health centre where a doctor looked at it.  He's been told he can do whatever he likes, even cycling or climbing, as long as it doesn't hurt too much.  He was back on his bike straight afterwards and only 10 mins late for his lecture!  It happened on his way back from handing in his maths homework.  There is no justice!

I have, of course, sent hugs and sympathy and dire warnings not to fall on it again and risk breaking it properly, and to go back to the doctor if it's not getting better.  But I think they would have sent him to Brighton for an x-ray if they thought there was anything to worry about.

Spider's A Level results were good but disappointing by his high standards in practice exams.  (Though he passed STEP!)

He's missed his offer from Nottingham, which is sad, but got Leicester, his insurance choice.  However, he's decided, based on course content and advice from his Head of Science, that Sussex's Mathematics and Physics degree is better suited to him (more maths less space).  He has the grades they want (plus some to spare) and they've made him an offer.  So we're now waiting for clearing to open so he can reject Leicester, accept Sussex and start arranging accommodation.  It's been quite a frantic day!  Consolation/celebration curry coming up soon.

Looking forward to visits to Brighton and feeling very lucky that Nanamonkey lives in nearby Lewes and is willing to provide emergency accommodation if needed plus some non-emergency meals out in Brighton.

It has long been theorized that the week prior to an exam is an extremely dangerous time for the relatives of college students.

An alarming piece of research with relevance to both my work and my family: grandmonkeys are advised to sit down and take a couple of statins before reading the full paper.

This time last year we had no black and white fluffball (Humbug having gone walkabout).  Now we have two!  Meet Bughum, the Other Beast of Girton.  Note white face, 70s 'tache and matching set of short socks.

We first heard about him last year when he generated a lot of false Humbug sightings down on the Cambridge side of the Girton gap. The agronomy research people call him CUFcat because they think he comes from Cambridge Uni Farm, near the astronomy place, but that's closed down now so he must live somewhere else.  It seems he's lost his hunting grounds to North West Cambridge development and been displaced up here.  He and Leicester had quite a civilised encounter after which he was permitted to skirt the perimeter to access the bramble patch further up Huntingdon Road.  Not sure where he comes from but presume he has an ape somewhere who helps him keep his fluff tangle free.  Presume he's male based on size and wandering, probably neutered since Leicester was able to stare him down, but who knows what he's got inside the fluff?

For comparision, here is the real, one and only Humbug. Note black face and generally asymmetrical, hungover and confused look.

Poor Leicester probably thinks this is how normal cats look and he is the weird one.

When you've just shaken off a three-day headache after only 2 days, it's not a good day for an eye test and contact lens check up.  Now, is this day 1 of a new headache, or the last day of the old one?

On the other hand, squirrel is feeling much better.  He sat his English Language yesterday and was probably less than his usual sharp self.  (He wouldn't normally forget to sign off properly when writing a letter.)  But he can afford to drop a few marks in English.  With any luck, he should now be back to normal for his main exams next week and after.
Collapse